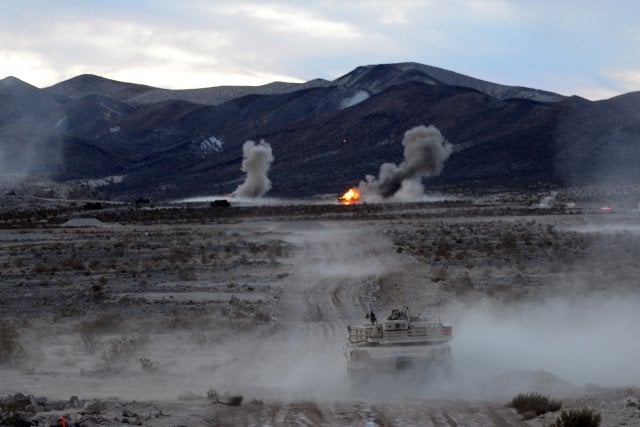 AUSA: How will the US fight the next war? Today, the Army’s top general declared that the military means “to shift from battles of attrition to battles of cognition, where we think, direct, and act at speeds the enemy cannot match in order to achieve a perfect harmony of intense violence.” The goal is to combine US forces on land, sea, air, space, and cyberspace in a seamless multi-domain operation, assailing the enemy from all sides at once until they’re overwhelmed. 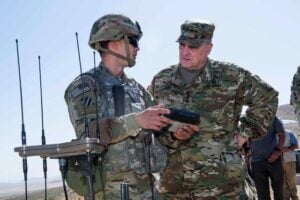 The Army Chief of Staff, Gen. Mark Milley, checks out a cyber/electronic warfare unit at the National Training Center.
The Army Chief of Staff, Gen. Mark Milley, is famous for his blunt and powerful rhetoric, which sometimes achieves a kind of brutal poetry. At the Association of the US Army conference two years ago, Milley declared that the spread of long-range sensors and precision weapons means that, “on the future battlefield, if you stay in one place longer than two or three hours, you will be dead.” But at this year’s AUSA, his last before his term as Chief is over, Milley set forth a confident vision of how the US Army can prepare to prevail on this kind of battlefield.
The near-term piece is training — training so intense, Milley said, that soldiers’ “lower lips are quivering” afterwards. The idea is to burn the lessons of simulated defeats into their memories so they can achieve victory in real war.
“The objective is to intentionally increase the stress on ourselves so we face our first battle in training, not in combat,” Milley said. “Yes, it’s hard, but its purpose is to keep you alive and effective on a future battlefield against a very capable enemy.” 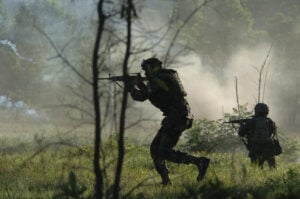 Infantry training at the Joint Readiness Training Center, Fort Polk, La.
What makes the new wargames at the Army’s Combat Training Centers (CTCs) so much harder and more realistic? It is “the distances traveled, the hours awake, the command post jumps, the obstacles breached, the live fires conducted, the increased skill of the OPFOR (Opposing Force) indirect fire attacks, the OPFOR’s guerrilla and terrorist attacks, the OPFOR’s use of electronic warfare and cyber, rotary wing and fixed-wing attack, ballistic missile attack, chemical and biological attack, and relentless enemy offensive infantry and armor combined arms attack — all that and more,” Milley said in a litany evoking the relentlessness of future battle.
But just as future enemies will attack US forces relentlessly by every means at hand, the US can fight back with every means as well. That approach is what the Pentagon now calls multi-domain operations. The concept is that all the services — Army, Air Force, Navy, Marines — coordinate attacks in all domains — land, sea, air, space, and cyberspace — to find the enemy’s weak point, wherever it lies, and break open their defenses.

An Army slide attempting to explain the Multi-Domain Battle concept, later renamed Multi-Domain Operations.
“A New American Way of War”
“We have to adapt the American way of war to the unique reality of future combat in highly dense urban areas, (with) rapidly emerging technology, along with increasingly contested space and cyber domains,” Milley said. “So we have been hard at work developing a new American way of war. We call it multi-domain operations.”
“In short, multi-domain operations is about winning, winning on tomorrow’s battlefield by simultaneously achieving overwhelming battlefield dominance and overmatch in all five domains of warfare,” Milley said. “We intend to seize and maintain the initiative, to gain positions of advantage, and breach (enemy) defenses in depth through combined arms maneuver in all domains and operate at speeds far faster than the enemy can react….. to disrupt, penetrate, disintegrate, and exploit the enemy’s anti-access systems and bring their fielded forces to operational paralysis.” 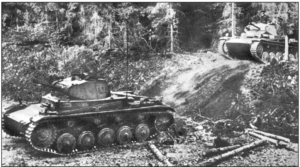 German Panzers cross the Ardennes to take French forces by surprise, 1940.
While the technologies and intensity are new, the basic principles behind this way of war are ancient. Defeating the enemy mentally by reducing him to “paralysis,” rather than by killing every single enemy soldier, dates back at least to Sun Tzu, who admonished that “all warfare is based on deception.” The German blitzkrieg of 1940 succeeded not only because of tanks, planes, and radios; in fact, the French actually had more and bigger tanks. The decisive factor was that Germans moved so quickly and changed direction so nimbly that the cumbersome French command system couldn’t keep up, like a chess player who can only make one move while their opponent makes three. 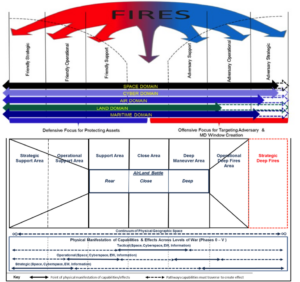 The Army’s battlefield framework for Multi-Domain Operations.
Another classic principle of war that Milley espoused? “Wars are won on the offense,” he said. That’s an implicit rejection of some learned observers’ anxieties that we’re headed for a new era in which the defense is dominant and bloody stalemate is inevitable. Their fear is that smart weapons will sweep attacking forces from the land, sea, and sky, much as machineguns and artillery swept the battlefields of the Western Front in World War I. The bloodless term of art for such a high-tech defense is Anti-Access/Area Denial — but all the US services sound increasingly confident they can crack such defenses open.
How will we know what we can really do, short of the horrific shock of actual war? Realistic wargames can help here too. “This new concept is in the process of development now,” Milley said. “It involves extensive field testing that is ongoing throughout the joint force in CONUS (the continental United States) and in both Asia and Europe.”
“We did our first iteration in the Pacific,” he said. That’s where the Army reinforced a long-range artillery unit — a fires brigade — and transformed it into the first Multi-Domain Task Force. “New multi-domain formations will be built in strategically important locations,” he pledged, without giving details.
It’s crucial to get it as right as possible before the shooting starts, Milley said, recalling his father’s service in the hastily mobilized military of World War II. “We can do better than the decisionmakers of his day who sent an army off to war in 1942 unprepared for the hardships of combat in the Kasserine Pass,” he said. “We can do better than the leaders who sent unprepared troops into Korea in1950, or the Civil War, or the Spanish-American war, or nearly every war America has every fought.”