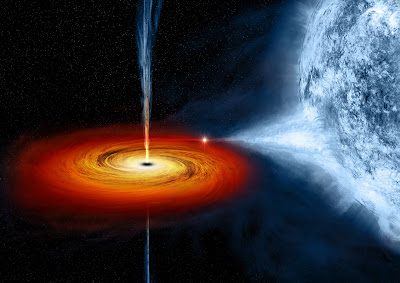 Black holes: the most mysterious objects in the Universe, where even light (which is the fastest phenomena in the Universe) cannot escape and even the laws of Physics break down.

These super massive objects have puzzled astronomers since the time they were predicted by Einstein in his Theory of Relativity.
Nobody really knows what is inside a Black Hole but using Mathematics and their knowledge of Physics, astronomers have predicted what a person entering a Black Hole would experience.

Imagine you & your friend travel to a Black Hole which is million times the mass of our Sun. Remember: Bigger Black holes are less deadly than the smaller ones! 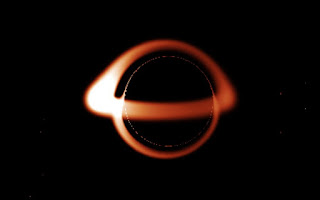 Smaller Black Holes are deadlier than larger ones.

Suppose you decide to sacrifice yourself to the Black hole for the sake of science and your friend decides to stay outside and observe what happens to you.

On the other hand, your friend outside sees you being stretched and pulled by the huge black hole but as a slow motion movie.  As you move closer towards the Black hole, your friend observes you being more slowed up. At the event horizon, you get destroyed and torn apart by the black hole into ashes. Your friend can see your ashes just outside the event horizon but for him, now the movie is stopped or frozen this is because your time hasstopped relative to him.

But here is the interesting part: For the outside world, you’re dead and burnt to ashes but for you, the reality is different. Inside the event horizon, reality splits into two!!!
For you, you are still alive, falling towards the singularity of the Black Hole and lost into the darkness inside the horizon.

But how can you exist at two places simultaneously? How can you be dead and alive at the same time? Physics laws would not allow it to happen. Right?

Here, the case is different. For the outside world, you are dead and this is the reality for them. They cannot see what is happening inside the Black Hole and for you the reality is different. For you, you are still alive and you don’t know that you're dead for the people outside as you cannot peep outside the black hole. Strange? Really not. This is just plain Physics.

The strange part is yet to come….

For you, you are falling towards the singularity where density is infinite, space time curve is bent infinitely, and when you reach the singularity, no one knows what will happen!

After all, understanding Black holes is not so easy!
ΠΗΓΗ  ΕΔΩ
Posted by ΛΥΚΑΣΤΡΟΣ στις Μαρτίου 15, 2018 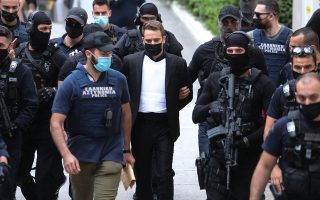