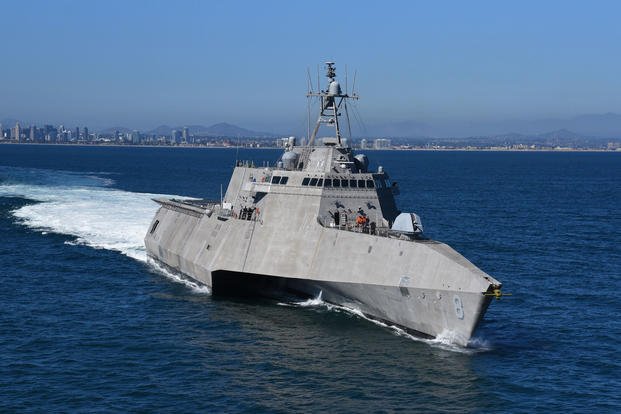 When the littoral combat ship was first delivered in 2008, former Navy Secretary Kenneth Braithwaite said he was not a fan.

"I wasn't a fan of it at its inception, but I've become a big fan of it," Braithwaite said this week.

As Navy secretary, the retired flag officer spent time aboard the ships, interacting with their crews and learning about their capabilities. That gave him a different outlook on the LCS, which has long been unpopular on Capitol Hill.

Braithwaite said one of the reasons he feels the ship gets a bad rap is that it was misnamed.

"LCS actually is a corvette," he said at an event hosted by the Heritage Foundation. "One of my other initiatives that I wanted to do is rebrand it. … I've done that in the private sector, rebranding companies. It's not an easy thing to do.

"But that ship was misnamed from the beginning. It is a super corvette."

Corvettes -- small, high-speed missile boats -- are not part of the Navy's arsenal. In a 2019 article in Proceedings, the U.S. Naval Institute's magazine, Marine Lt. Col. Colin D. Smith wrote that, while the Navy has tested small ship variants since the Pegasus-class lethal patrol craft launched in the 1970s, the service has shied away from them.

The Navy tried to address littoral needs with the LCS, "but it struck out miserably," Smith argued, saying the ships serve little functional purpose against modern threats.

Braithwaite said he felt the same way about the LCS when he became Navy secretary in 2020.

"It was not a hull form that I would ever embrace," he said. "... Then, when you really peel back what the ship's capabilities are, you know, something like being in the straights or in other littoral spaces is perfect for that ship."

After years of mechanical setbacks -- including a recent issue that has halted delivery of new littoral combat ships -- Navy leaders say the LCS will play a role in the future fight. Vice Adm. Roy Kitchener, commander of Naval Surface Forces, said in January that the LCS would see a surge in missions in the Pacific as military leaders look to counter China's growing maritime influence in the region.

The commanding officer of the LCS Montgomery's blue crew told reporters in 2019 after the ship's first deployment that he saw firsthand the benefits of having an LCS in the Asia-Pacific region. The ship was able to pull into shallow ports bigger vessels wouldn't have been able to visit, allowing the crew the chance to work with a range of regional navies.

Braithwaite said that he agrees the LCS will play a role in that part of the world.

"Looking to create a squadron in Singapore that would have patrol responsibilities in that part of the world, I think, would be a great role for the LCS," he said.

The Navy plans to divest itself of the first four experimental LCSs and other ships that aren't fit for a fight against sophisticated adversaries.

One of those ships, LCS Freedom -- the Navy's first littoral combat ship -- returned this week from its final deployment, where it carried out a counter-drug mission in the Caribbean and Eastern Pacific.